A Most Marvelous March!

March is turning out to be rather an exciting month . . .let’s cover it chronologically, so I’ll hopefully remember everything!

First of all, I’m doing a bookstore event THIS WEEKEND, like, the day after tomorrow!  Eeeep!  Sorry for the short notice — but I hope some of you can come anyway!  I’ll be at Porter Square Books in Cambridge on Saturday, March 7 for an event supporting the Cambridge Friends School — the event goes from 5-7pm, and I think I’ll be speaking from 6:15 to 6:45pm, then signing afterwards.  Another fabulous author, Suzy Becker, will also be there, speaking before me, so you should get there at 5 and see her, too!

And then less than one week from today (March 10!), as you hopefully all know, you can all get your talons (or tentacles or paws) on THIS excitement!: 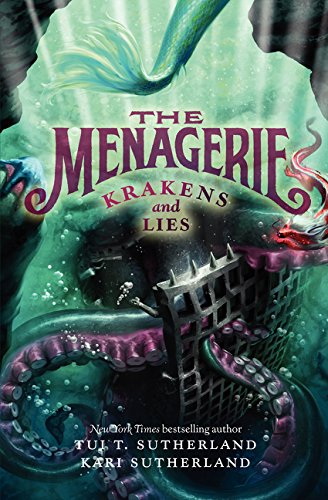 It’s the third and final book of The Menagerie!  Hooray!  Where ALL THE MYSTERIES ARE SOLVED and all the secrets revealed!  (I hope!  Unless we forgot something!)  😉  What really happened to Logan’s mom?  Who’s sabotaging the Menagerie?  What in the world is a bunyip?  I’m really excited for you all to read this one…it’s always really nerve-wracking and thrilling to wrap up a story…and then cross your fingers and hope everyone likes it!

Next up, Saturday March 21, I’ll be at Worlds Collide Con in New York City, as I’ve mentioned before — you guys, the more I hear about this event, the more awesome it sounds.  It’s going to be SO MUCH FUN!  I can’t wait!  Have you seen all the other authors that will be there, too?  Linda Sue Park!  Eliot Schrefer!  Jennifer Nielsen!  Gordon Korman!  Natalie Standiford!  Peter Lerangis!  Jude Watson!  Michael Northrop!  Oh my goodness!  🙂

Then I’ll be doing another bookstore event on Saturday, March 28th, at 2pm at Newtonville Books, and I’m beyond excited about this one because it’s a group event with two new friends:  Christine Taylor-Butler, author of The Lost Tribes (and a million other things, but this book is the beginning of a fantasy series that sounds perfect for you guys — and for me!), and Sage Blackwood, author of the Jinx trilogy (which I just started reading and already love!).  We’ll be talking about magic and saving the world and writing and a million other things.  MAYBE I will even read from Wings of Fire BOOK SEVEN!  YES.  If you want a sneak peek of Winter Turning, COME TO OUR EVENT.  (Mwa ha ha!)  🙂

Or another way to get an exclusive sneak peek of book seven will be coming your way on March 31, tucked at the end of THIS:

What?  What is that?  I know, it’s mysterious and hopefully exciting!  Those of you on the forums already know about it, but for everyone else: it’s a short story set in the Wings of Fire world, which is being published as an e-book.  Basically it’s to help tide you over until book seven comes out!  🙂  My hope is to do a couple of these in between the books, since I know it’s torture making you wait . . . and because there are so many stories to tell about these dragons!

Fierceteeth knows she could have been a dragonet of destiny. She’s a much better NightWing than that weird brother of hers, Starflight. Her dreams of glory have been painfully scorched, though, and now she and Strongwings are captives in the SandWing prison, waiting to be put on trial. Fierceteeth just wants a chance to tell her side of the story — before it’s too late.

Tui T. Sutherland, author of the bestselling Wings of Fire series, soars further into the world of Pyrrhia’s dragons than ever before! In these brand-new short stories, fans will meet old friends and new ones, uncover shocking secrets, and learn more about the terrible challenges that will test all dragonkind!

Each story is available exclusively in e-book and is the perfect read for Wings of Fire fans who just can’t wait for the next book in the series!

I’ve already had a few people ask whether it’ll be available in paper form as well — I know, I feel your pain; I’m not an e-book person either.  Right now the plan is just to publish it in the e-book format…I’ll let you know if that changes!  But if you absolutely can’t find a way to read it, don’t worry — the story is related to what’s happening in books 6-10, but it’s not essential to understanding the books.  (Mostly it’s the backstory of Fierceteeth’s life before Starflight came along — but you do get to find out what’s happening with her now, too!)

I find Fierceteeth pretty fascinating, so I hope you’ll be interested, too!  And then there should be another Winglets coming along between books 7 and 8…we’ll have to wait and see who that one will be about!  (What do you think?  Dune?  Kestrel?  Stonemover?  HMMMMMM…)

So that’s my March — how does yours look?  Please come out and join me at these events if you can!  And if you’re not in the NYC/Boston area, don’t worry, I’ll be hitting a couple of states later this year which I’ve never visited before…I’ll announce those as soon as I’m allowed to.  🙂

OK, just one quote from my hilarious bears that I have to share!  The older one turned five a couple of weeks ago and the younger one did NOT enjoy the “someone else’s birthday presents” experience one bit, no matter how much we reassured him that in two months he will be three and then ALLLLL THE PRESENTS WILL BE HIS.  So he picked up a wand and went around the house bellowing:

Which I thought was sort of genius of him, don’t you?  🙂  And I am totally writing that picture book one day!

What We’re Reading:
Me: I’ll Give You the Sun by Jandy Nelson, Jinx by Sage Blackwood, and Get in Trouble, by Kelly Link

With my bigger bear: Big Momma Makes the World, by Phyllis Root; Yes Day! by Amy Krouse Rosenthal; Phoebe and her Unicorn by Dana Simpson, and we also just finished and loved Giants Beware! by Rafael Rosado and Jorge Aguirre

With my littler bear:  Bunnies! by Kevan Atteberry, plus every Halloween book he can find in the library and anything with Frozen on the cover

Still Here, Under All This Snow